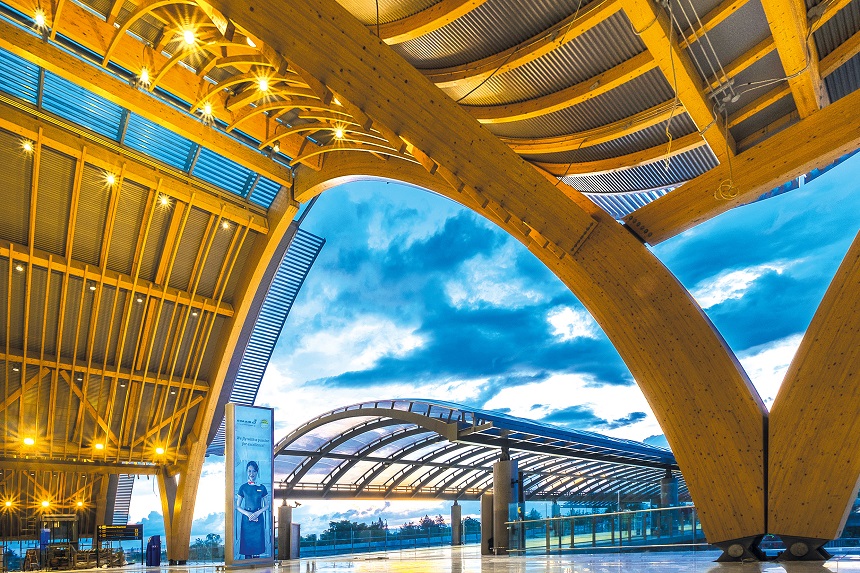 Mactan Cebu International Airport is the Philippine government's first public-private partnership project with an international operating company. The airport is the second largest in the Philippines and acts as a gateway to the touristic­ally and economically booming islands in the south. The airport offers a pleasant indoor climate due to its remarkable height. The building is naturally lit via vertically accentuated all-glass facades; exterior tubular ribs provide shading for the rooms. The natural diversity of the Philippines and the regional craftsmanship were reflected in the materials used in the furnishings.

For Rubner Holzbau, the roof structure which is made entirely of glulam, was the largest contract in the company's history. Rubner Holzbau was able to convince the investor to construct the building in glulam rather than steel. 4,500 m³ of glulam were required for the architecturally distinctive, wave-shaped barrel roof load-bearing structure with a height of 15 m and a span of 30 m. The long arch truss halves were all prefabricated in the factory and the components were shipped to the Philippines in three tranches.

The challenges were the construction of the building joints for movements in case of an earthquake and high wind loads, as well as the anchorage of the main girders to the concrete structure. During the hurricane season, wind speeds can reach up to 200 km/h. The building was constructed according to European standards, which are among the strictest worldwide. From the outside, the three-aisle entrance hall now looks like an ocean wave, while the view inside suggests the typical fishing boats of the locals.