As in 2018, this year's AGPB AWARDS have been presented by high-ranking government representatives together with representatives of the Austrian Federal Economic Chamber in the framework of the evening event of the international construction congress Future of Building 2019. The evening event took place on 4th June, 2019 in the premises of the Diplomatic Academy Vienna, around 300 guests from Austria and abroad have announced their participation. Detailed information about this award ceremony with photos can be found here.

The Passive House Technology and Experience Center in Qingdao China was built as one of the first buildings in Sino - German Ecopark Qingdao. It is an outstanding example of energy-efficient and sustainable construction in China.

The modern timber construction by Baumschlager Eberle Architects and his partner SCAPE Architecture combines attractive architecture with extremely low energy consumption and was the first large-volume office building with a plus-energy balance in France. This is ensured by a large PV system on the roof and optimised components in the shell of the building. The multifunctional building demonstrates how sustainable construction can be put into practice.

Georg W. Reinberg provided the design and implementation consulting for Estonia's first certified passive house, which, due to its comprehensive PV system and solar thermal system, meets the plus energy standard very closely. Many other Austrian companies were involved in the planning and implementation.

After a successful appearance at the EXPO in Astana, the timber construction company Weissenseer developed prefabricated wooden houses with lowest energy consumption and relies on state-of-the-art technologies. From an efficient shell to PV systems, solar thermal systems and power storage systems, houses are being built for the coming decades. The "Energy City" housing estate is to contain 200 buildings when completed.

Weissenseer also supplied the prototype for prefabricated wooden houses in passive house quality. Together with a passive house company from China, the market for this energy-efficient form of living is to be prepared.

Architect Irene Ott-Reinisch planned and built a hotel and a tourism school in the Kingdom of Bhutan with both modern and traditional means in an energy-efficient way. The low energy consumption is provided for heat by sustainable supply technologies, in addition to a new building, existing properties were also renovated.

During the first presentation of the new award scheme on 8th May, 2018, the first four buildings received the AGPB Award. These are: an education and office building in the United Arab Emirates, a mosque in Kazakhstan, an embassy building in Thailand and an office building with adjoining residential wings in China. The broad range of utilisation and the geographical spread of the first award-winning projects shows that Austrian know-how and Austrian technologies have an extensive potential for sustainable construction worldwide.

The Sheikh Zayed Desert Learning Center in Al Ain (United Arab Emirates) is an outstanding example of sustainable and energy-efficient architecture in the Gulf region and the Arab world where the lighting design and building technologies, as the sustainable cooling system and a large photovoltaic system on the roof of the building, meet the highest standards.

The Yryskeldi Qajy Ata Meshiti Mosque in Astana (Kazakhstan) is the first mosque in the world with a positive electricity balance and an extremely low heat demand.

The Austrian Embassy in Bangkok (Thailand) is one of the first plus-energy buildings of its kind in the world: a combination of outstanding architecture, low-tech building technology using regionally available materials as well as a comprehensive photovoltaic system.

The office building with attached residential wings of Hebei Xinhua Curtain Wall Co. Ltd. in Zhuozhou (China) is the very first building in China to be officially certified according to the sustainability standards of the Passive House Institute. Extremely low energy demand and high thermal comfort are the outstanding features of this pioneering building.

AUSTRIAN GREEN PLANET BUILDING focuses on foreign countries and relies therein on the national quality seal of klimaaktiv for the quality criteria to be applied. In Austria, almost 800 buildings have been planned and constructed according to the klimaaktiv quality criteria for construction and renovation. These include universities such as the refurbishment of the Technical University of Innsbruck (Upper Austria) or the plus-energy building of the Technical University of Vienna, residential buildings of various sizes and construction methods allover Austria as well as numerous office buildings and company headquarters, e.g. the high rise buildig of Raiffeisen in Vienna. A complete and constantly growing documentation of all buildings can be found in the building database of klimaaktiv. 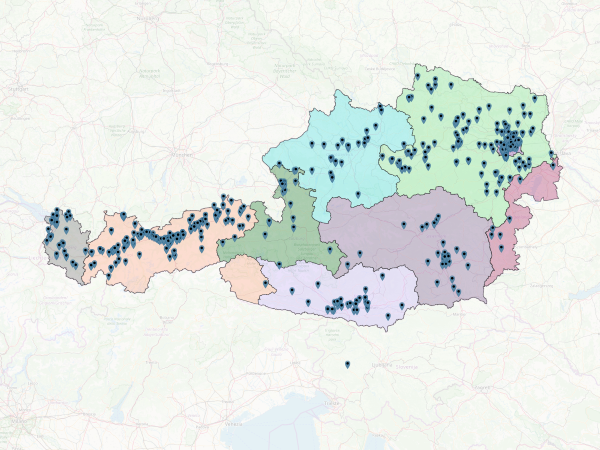